When I was growing up, Pop practiced what he called general farming. He had about a dozen milk cows, a couple of dozen chickens, raised enough corn for the cows and enough tobacco to fill the barn. Most other farmers hereabouts did the same. Few people had big equipment. Hay was cut with a sickle mower and pastures were seldom mowed at all. Nearly everyone's fence rows were lined with blackberries, cedar trees, hackberries and more. Things have changed dramatically in the decades since I began operating this place in 1972. Most land use hereabouts has shifted from pasture and hay to corn, wheat and soybeans as cash crops. Most fencerows have been pushed out. The few unworked edges on most local farms are now mowed many times each season with huge rotary mowers, for no economic reason at all – simply to keep things looking prim and under control. Even people's yards are less diverse than they used to be. Shrubs and flower beds are too much trouble for a riding mower to dodge around. Many farms still have small woodlots, but these are disappearing one by one. Whenever any local land comes up for auction, it's usually bought by one of a small handful of big boys who seem to have a bottomless credit line. The first thing any of the big boys do when they purchase a new tract is to push out all the trees. Some of the big boys can't even abide a small copse of trees surrounding a sink hole. The trees are bulldozed, burned and buried. A track hoe digs into the sink hole, then it's filled to ground level with rip rap. One big dairy farmer has a huge acreage in pasture, but sprays it with one chemical that kills everything but grass and another chemical that keeps the grass from ever going to seed, managing to make a biological desert even out of grassland.

With ever diminishing local habitat, it wasn't a matter of simple luck that I found myself hosting a Harris's Sparrow this winter. While most others in the community seem dedicated to keeping any plants other than cash crops from getting over an inch high or existing at all, I've sought ways to make my land more welcoming to birds. I don't clip my pastures even once a year as a matter of course. I only clip problem areas where there is a lot of spiny amaranth or cockleburs. I don't cut my red clover hay any later than early July so there will be enough time before frost for a crop of weeds to come up and make seed for winter sparrows.

It was along such a hayfield margin that I first discovered Jeeves on December 8, 2014. A group of White-crowned Sparrows flew up ahead of me and perched in a small Mulberry tree. Any group of birds can include one that's not like the others, so I scanned the tree and immediately recognized that I was looking at a Harris's Sparrow. I took several photos with the small camera I pack with me all the time, made a post as quickly as I could, then returned with the scope to try for better shots. Could not re-find, but did spot a Grasshopper Sparrow I had seen a couple of weeks earlier and got more pictures of it.

Brainard made plans to come out as soon as he saw my post and recommended that I scatter cracked corn in the vicinity where I first saw our new guest. When I failed to relocate Harris's Sparrow on December 9, I began to think it premature for anyone to make plans to visit. Had better luck on December 10. After about fifteen minutes of watching the cracked corn filled plastic lids placed at the edge of a blackberry patch, Harris's Sparrow hopped out from cover, ate some corn, then hopped back to cover. Didn't get a picture, but when I added more corn to the trays before leaving, it flew to the same Mulberry as on December 8. I had scope with me this time and got my first quality photos. Here's one of them. 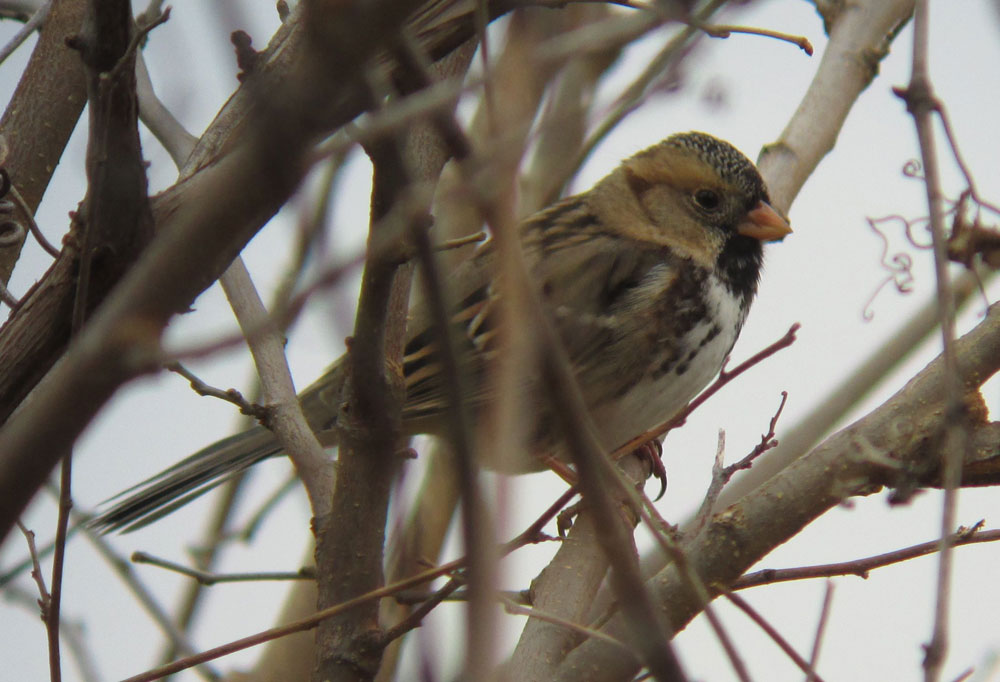 A group of nine came in several parties to see our new guest December 11, just 3 days after his discovery. Wait time for the first visitors varied from 15 minutes to 2 hours, but all saw the target bird. Others began making plans to visit in quick succession after that. Within a few days I had settled on Jeeves as a pet name for our little sparrow guest because the black bib on a white field reminded me of Bertie Wooster's neatly groomed personal valet Jeeves of the British comedy Jeeves & Wooster. We had recently bought the entire series at McCay Used Books in Nashville and were binge watching it when our own little Jeeves appeared. At first I shared my pet name to only a few, but in my Christmas day report I confessed my indulgence to the whole list serv. There is no reason to think Jeeves is a male, but I eventually began using the pronoun he anyway.

Early on, one set of visitors missed seeing Jeeves. Mike Wright and Mickey Green of Morehead gave up after a 3 hour vigil in a cold west wind. They came back on another day and saw Jeeves within a few minutes, but their failure that day set me to planning a shelter to enable visitors to watch for Jeeves without the west or north wind cutting into them. I was kind of concerned about what certain nosy neighborhood folks would think about it and to avoid negative commentary as long as possible, first constructed it inside a barn to get an idea how noticeable it would be from the road. I put off setting it up in the field until Pam Spaulding came from Louisville in a light rain, December 27. To my surprise, no one in the neighborhood ever commented on it or asked about it the entire time it was up. It must have had an invisibility cloak around it. 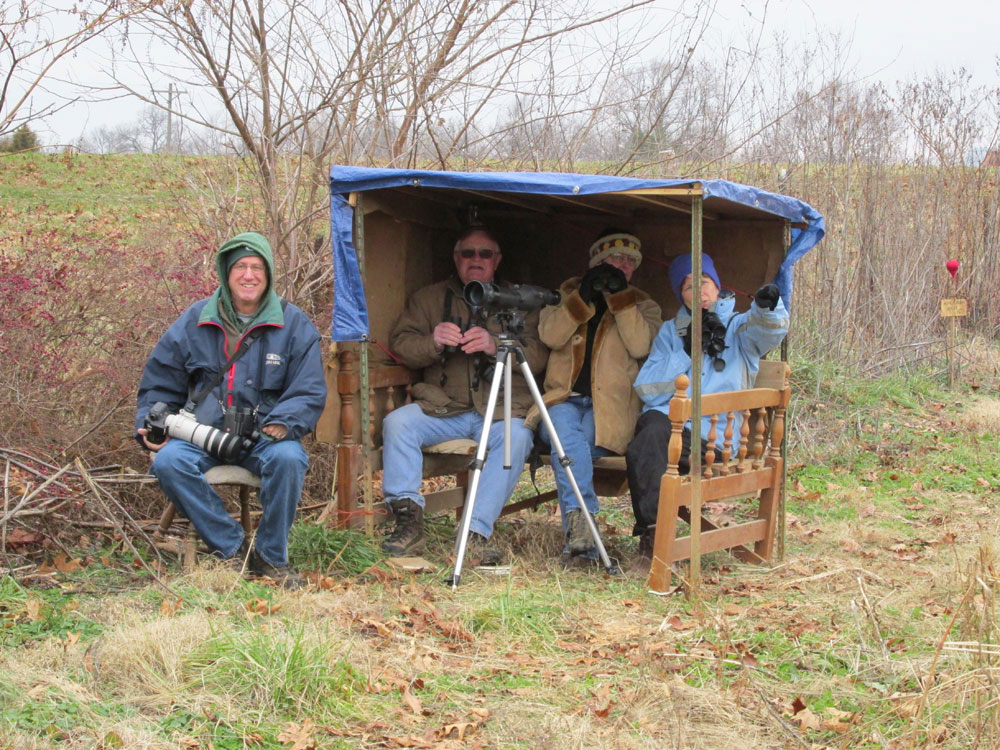 Many of our guests wanted only to see Jeeves, but enough took photos to make it evident that plastic bucket tops aren't ideal backdrops. 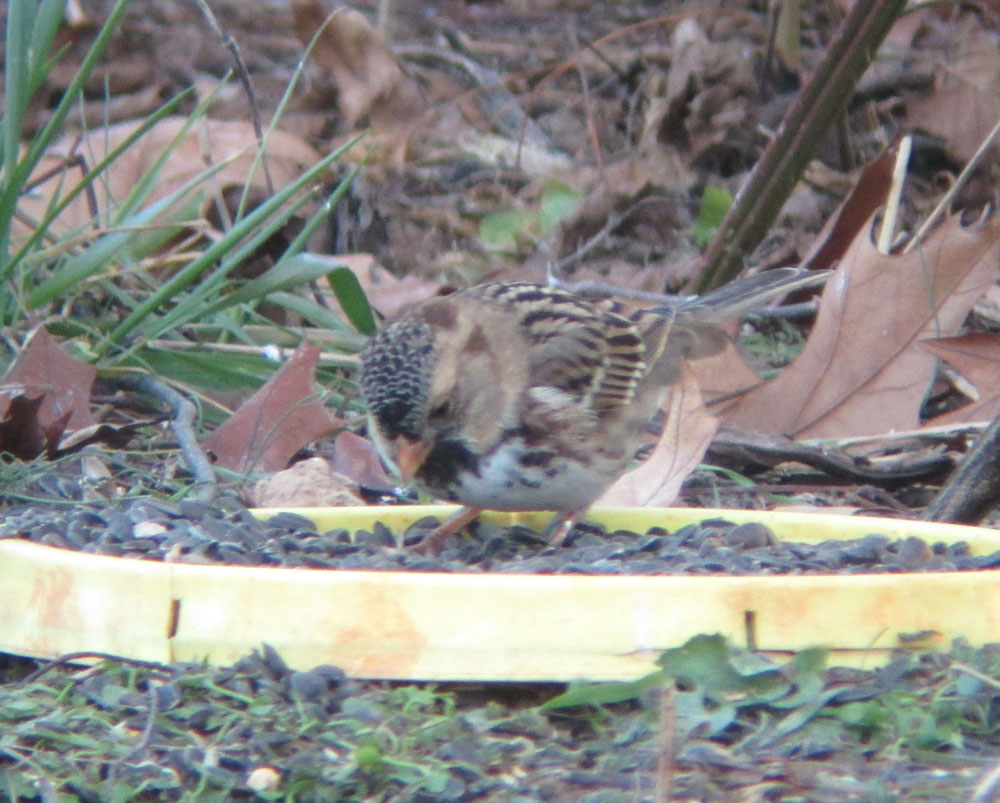 I'm a rock collector from way back and already had a mental map for a number of large flat rocks I had yet to acquire. I got rocks in place by December 22, naming one Corn Rock and the other Sunflower Rock. Most pictures from then on, both by me and by others, have been on either Corn or Sunflower Rock. Jeeves soon fell into a pattern of sporadically hopping out from cover, feeding and scratching on both Corn and Sunflower Rocks for about a half minute, then hopping back to cover. I rarely saw him anywhere else. These rocks were about 80 feet from the canopy. This is about the best I could do from that range. 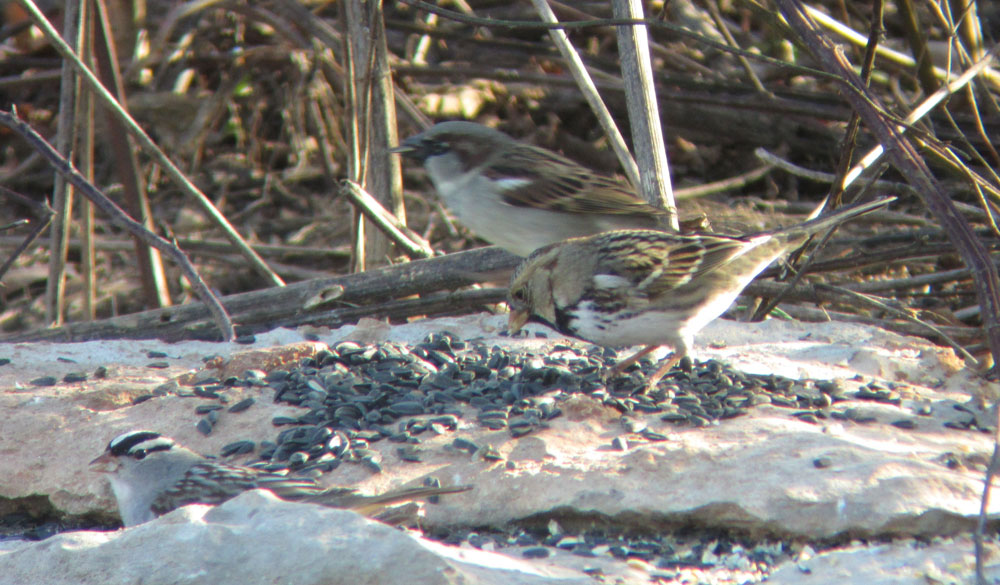 I wanted better shots and so set up a rock stack 50% closer to the canopy, making the stack high enough that I could scan back and forth from near and far rocks without adjusting scope up or down. I put safflower seed and white millet on it and christened it Gourmet Rock. It was too far from good cover to get much usage at first, so I grubbed enough multiflora roses from various fencerows to make artificial cover all the way from Corn & Sunflower Rocks to Gourmet Rock. Despite all this effort, I never captured Jeeves on Gourmet Rock through the scope, getting only a few distant shots with my sx-160. 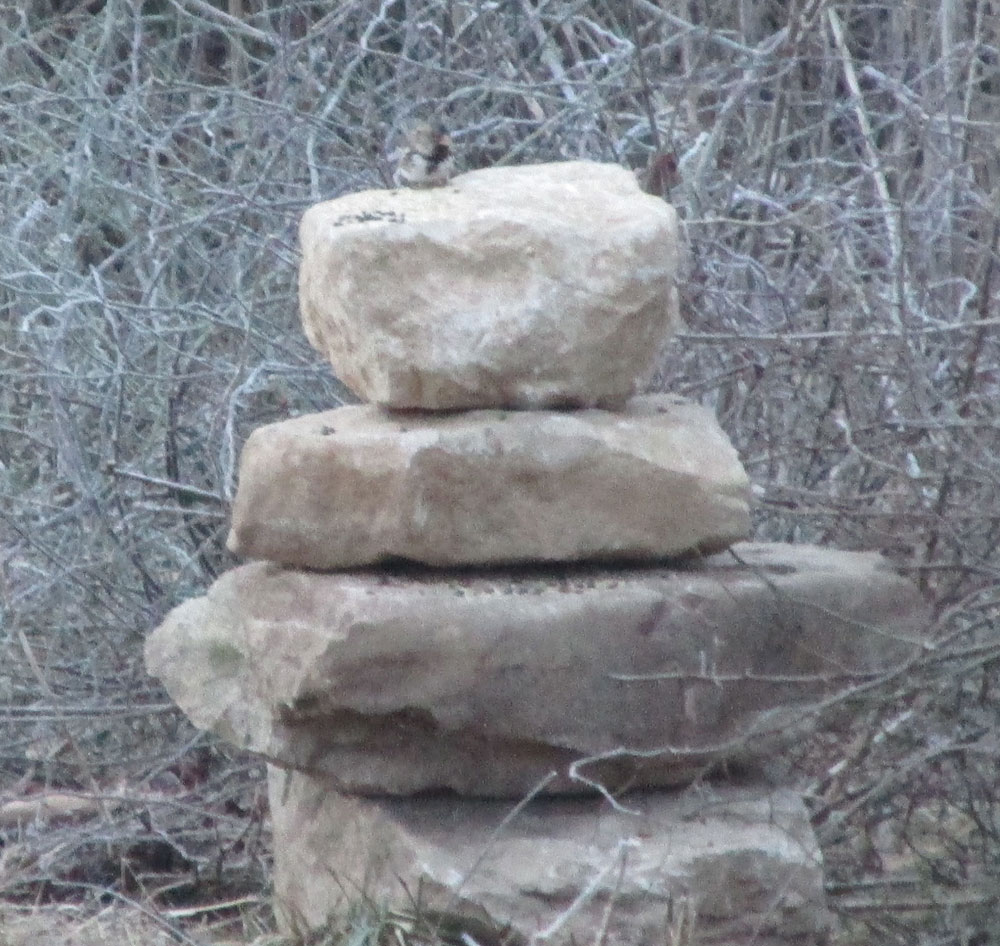 Pam Spaulding had a better plan for closer shots. On February 10 she brought out a blind which she set up about 30 feet from Jeeves' usual feeding station. Jeeves was very slow to appear for her. She eventually got some close up shots, but her focal depth was so shallow that she was not pleased with any of them. 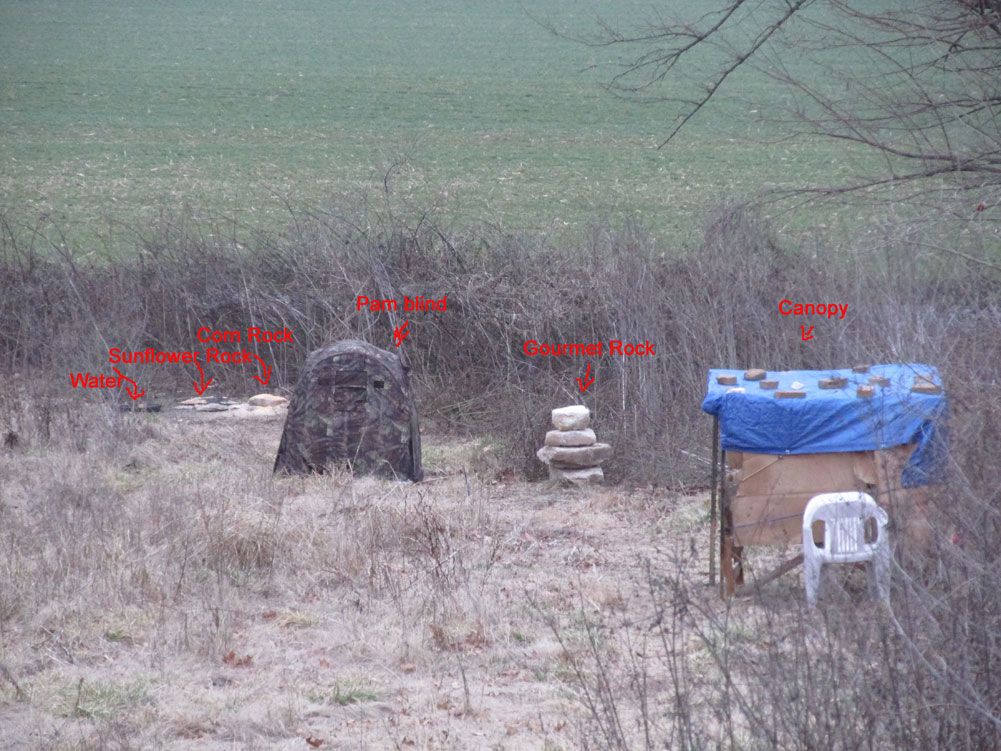 Antonio Xeria came out the day after Pam's second visit. He was the Sixty fifth visitor and the last one to view Jeeves from the canopy. A big snowfall a few days later changed everything. Grackles, Cowbirds, Red-winged Blackbirds and Starlings began arriving in droves, displacing the feeder regulars and gobbling up an entire sack of cracked corn in less than two days. Jeeves made his first appearance in the yard during the blackbird invasion, apparently unable to find a place at the rocks in the field. Soon after that I came to a decision to suspend feeding in the field and guard the yard feeders from blackbirds long enough each day for all the little guys to have a chance to get some food. We were almost out of groceries and bird seed when our next visitors, Steve and Cindy Matherly of Katy, Texas came by and got good looks at Jeeves perched in the flowering quince from the point of view shown below. 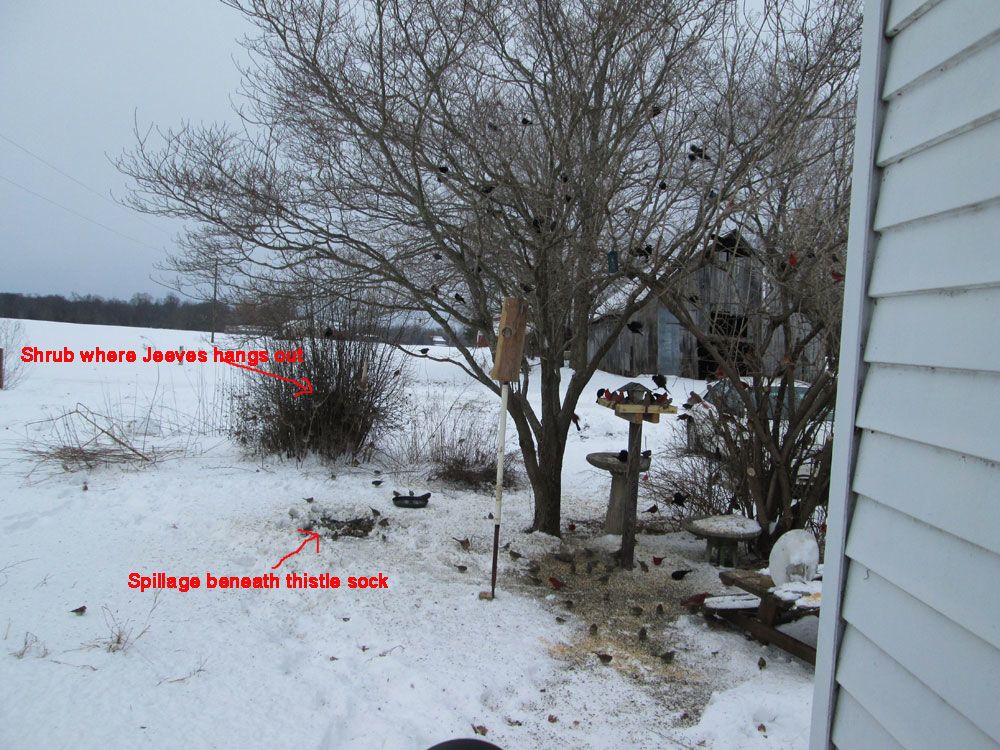 They said the roads were just fine the way they had come in so we went into town for groceries and food for Jeeves. On the way home we noticed that the other end of our little side road appeared clear, so we came back that way. The wind had drifted loose snow over a stretch of this road and we came dangerously close to hanging up, but we didn't. I'm glad I didn't have to make a choice between walking the rest of the way home with some of the groceries or with a sack of corn.

The snow did have one up side – better photo ops. In a yard stake out on February 20 I got the best picture of Jeeves of the whole winter. Knowing I wasn't apt to do any better, I named it Jeeves glamor shot. Alison made a painting from this photo and put it on her wildlife page. 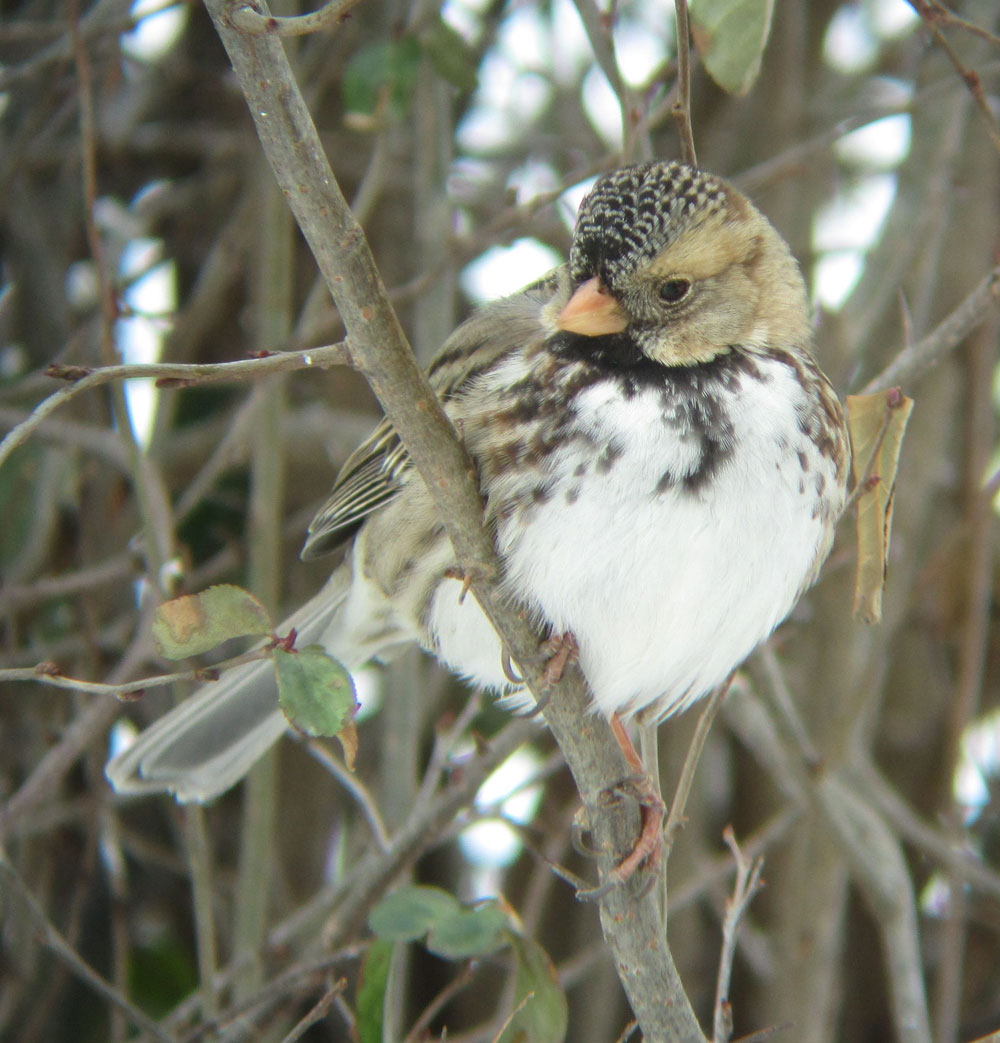 For me that was the climactic event of the winter, leaving me little else to strive for other than keeping Jeeves fed until he decided to leave. There were a few more visitors. Andy Lantz of Nashville braved a lawn chair in the snow with no socks, or at least none that I could see above his shoe tops. A half dozen after that viewed Jeeves from inside the house through the kitchen window, including our last guest, Joyce Bender.

I took a renewed interest in photographing Jeeves when he began to molt shortly before leaving. He looks a little shaggy in this April 15 photo. 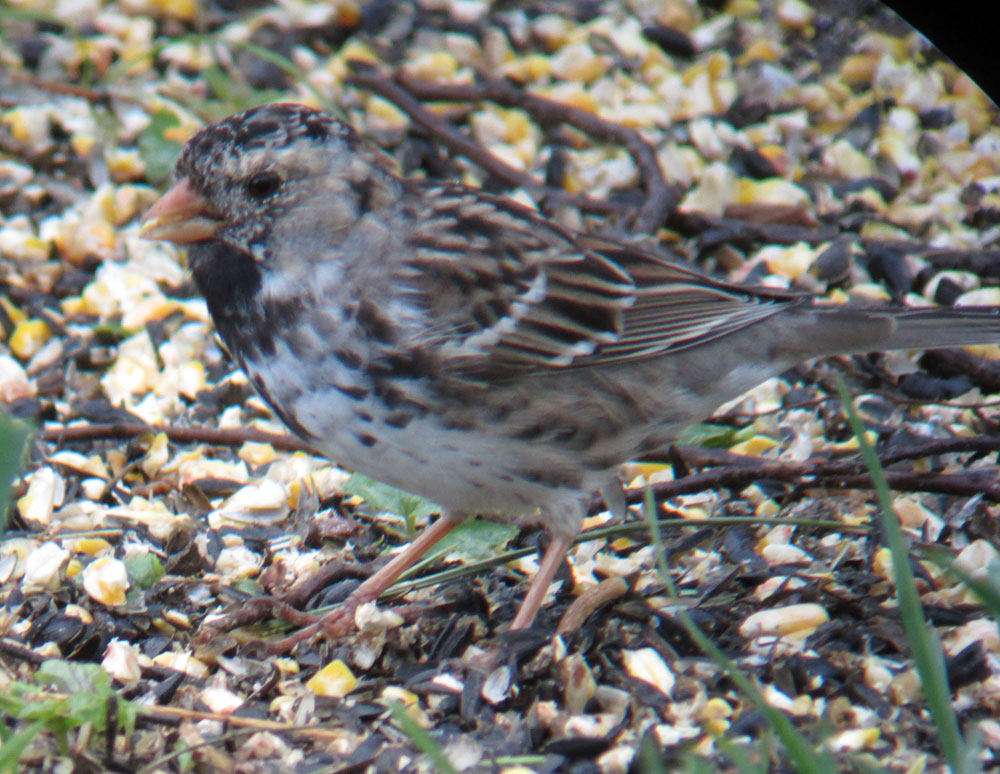 I kept trying to get pictures of him through the open kitchen window as he completed the change into his summer outfit before leaving. Here is one taken on May 2, a couple of days before his departure some time after 2:30 P.M. on May 4. All but 3 of the White-crowned Sparrows departed at the same time. Complete visitor list below this picture. 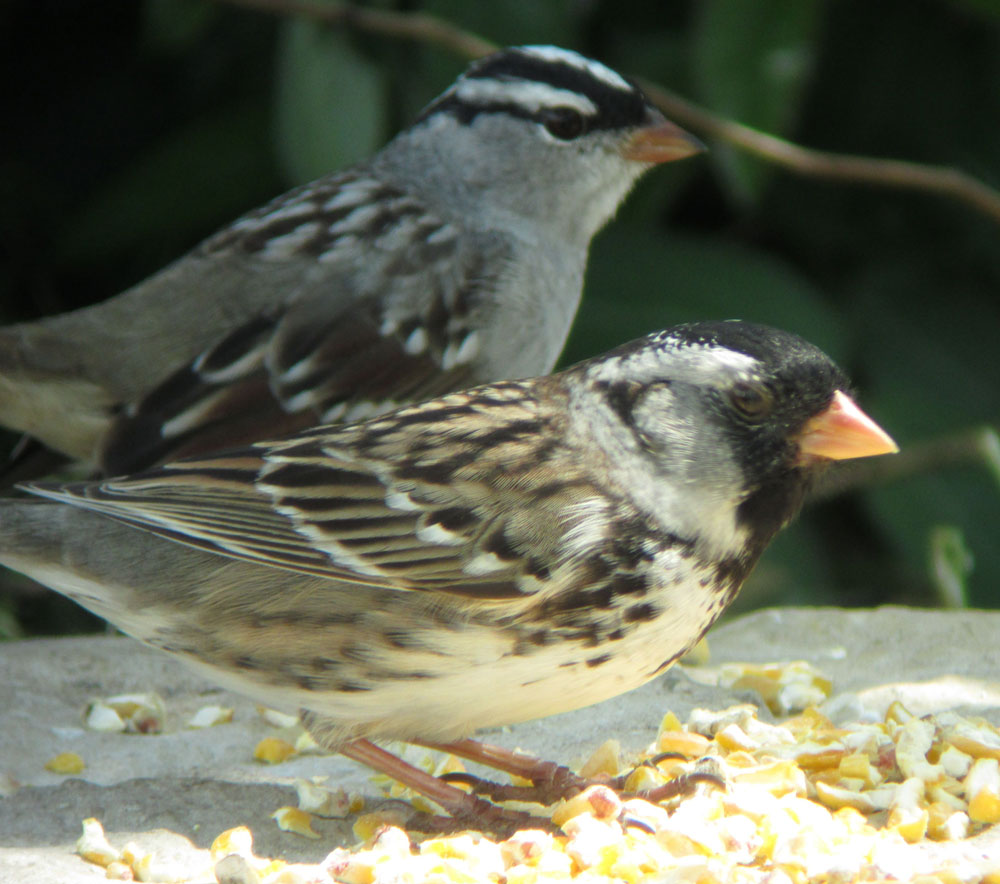 Alison's Illustrators Linkup Page with links to many other artists. - Shows me demonstrating how to position a block of wood for carving

Links to people we know

Daniel Arite - Nashville, Tennessee - Daniel is both a musician and a visual artist. His first CD is called The Secret Marvelous Instead, Vol. 1 and features the lyrics of Thandiwe Shiprah and Daniel's music.

Shooting Star Nursery - specializes in plants native to the forests, prairies, and wetlands of eastern North America. Plants are grown from seed or vegetatively. They do not sell wild-collected plants.

Ebird – A web site sponsored by The Cornell Lab of Ornithology and The Audubon Society for reporting bird observations anywhere in the United States.